The complete PANDA approach and its benefits

The PANDA project develops a standard efficient virtual design and real testing methodology to reduce the overall development time of new electrified products and vehicles.
We are proud to announce that the PANDA consortium has succeeded in improving the virtual and HiL testing efficiency, leading to 4 to 20 times savings in development time for EVs! 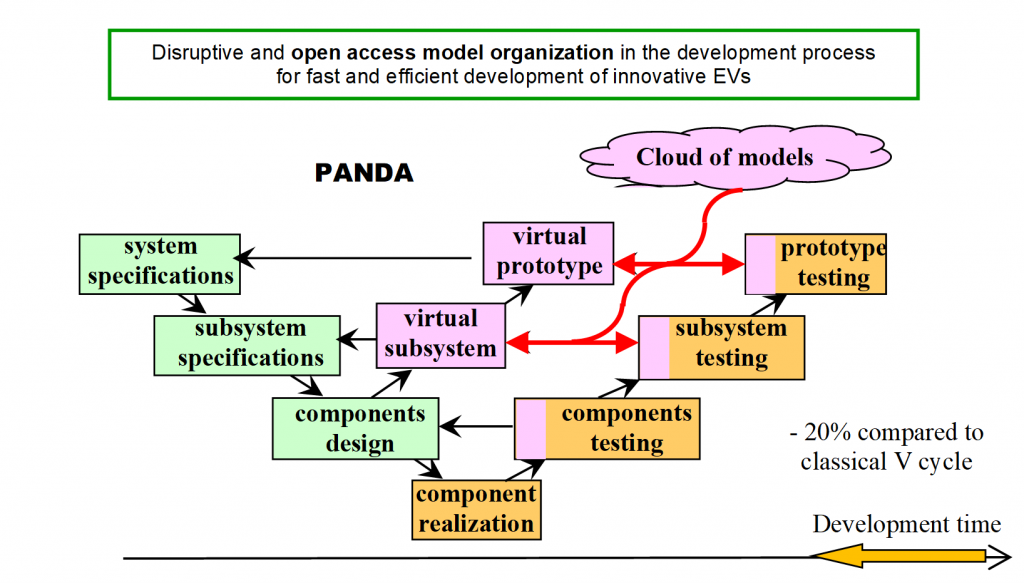 The methodology for model organization proposed in PANDA is based on the EMR (Energetic Macroscopic Representation) formalism. The PANDA methodology has been divided in 3 different levels:

Concept: One of the key features of the proposed methodology is the flexibility of the simulations given by the possibility of directly replacing a model of a component or a system with another model of the same component or system but with different complexity. This feature gives the possibility to very easily change the simulation type one can perform on the same global architecture. A quick replacement of a model and some tuning on simulation parameters can provide a simulation for a system validation or a simulation for the validation of the global performance of the vehicle.

Results: The model is able to reproduce the behavior of the Plug-in Hybrid Electric Vehicle (P-HEV) by predicting physical system variables such are currents, voltages, torques, and speeds. The model is also able to give the power and energy consumption on desired vehicle velocity profile, for energetic evaluation.
Simulations are performed using MATLAB-Simulink © software and Simcenter AMESIM © software provided by the partner SISW. Different complexity models for the electrical drive developed by VEEM are presented and implemented in Simcenter AMESIM © software using EMR model organisation and a black-box model. Validation of global vehicle simulation was done by ULille. Simulation results for the global traction system of a P-HEV are compared with physical measurements performed on the real vehicle. The vehicle was tested on real driving conditions by VEEM, and various physical variables from the powertrain were recorded.
Multi-level simulations of the global vehicle were done by SISW and parameters from the simulation are compared with parameters from the real vehicle. Thus, the accuracy and general behaviour of the different powertrain components were validated, and the model organization capability was demonstrated.
As a result, the model can be used at the first stage virtual testing of the vehicle control systems and EMS and also for system level integration.

Result: HiL tests were successfully achieved for the battery, e-drive, and the e-subsystems of the studied P-HEV. These tests were performed in stand-alone P-HiL testing, uploading the models to a local real-time ECU (electronic control unit). Results achieved include 1) reduced-scale HiL testing on the ULille flexible experimental platform, and 2) a full-scale HiL test realized at VEEM to test the real e-drive at full power!

Concept: One part of the simulation is computed in real time in the local Typhoon ECU and one part is simulated by Simcenter AMESIM © in the cloud. The decomposition of the real-time simulation is facilitated by EMR organization.

It is well known that in the automotive industry many prototypes must be built, integrated, and tested in a more complex environment before reaching the final product state. The combination of virtual and HiL testing allows to test and compare quickly, accurately, and efficiently a large number of components, before the actual integration in the vehicle. By comparing virtual, HiL, and real testing of different components, the project has demonstrated the potential and beneficial effect of using more simulation in the product and vehicle development phase. Since testing a new component in a demo-car is extremely time consuming, virtual and HiL testing contribute to a significant reduction of the development time for the components and the vehicle.
Proven PANDA benefits:

Conclusion: Both virtual and real testing have been developed in parallel in a fast and easy way thanks to the PANDA methodology, which also demonstrated the potential of cloud-based HiL testing of components. The EMR organization of the models enables a clear and fair decomposition of the models for different splitting solutions thanks to the fixed I/Os between the different parts of the models and the controls. Common models and common cloud between OEM and suppliers provide a way to increase the reliability of the component development and to reduce the number of tests at reception, thus the number of tests on the vehicle prototype. Thus, the approach leads to substantial time and cost savings, enabling faster vehicle development, a cost reduction of the development, and cost optimization of the vehicle.